The Biathlon Jr World Championship Team Selection Trials concluded on Sunday at Mt Itasca. Conditions at Mt Itasca were spectacular, with a perfect grooming on a 2.5km loop. Mt Itasca’s hilly terrain tested athletes with infamous “waterfall climb” right before coming into the shooting range.  Very light wind and good visibility also made for excellent shooting conditions. The three day series started off on Friday, Dec 28 with a 7.5km Sprint for Youth (age 17-18) and Junior Women (age 19-20) and 10km Sprint for Youth and Junior Men. Athletes raced a 4 stage Pursuit Format on Saturday and another 2 stage Sprint race on Sunday. 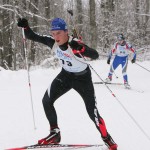 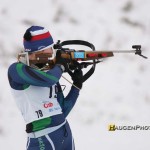 The big winners at Mt Itasca were Sean Doherty, Center Conway, NH and Anna Kubek, Duluth, MN.  They dominated the race series, both winning all three races with excellent shooting and fast skiing.   Both Doherty and Kubek were members of last Winters Youth Olympic Games Team, and won bronze medals in the combined Biathlon/Cross Country relay in Innsbruk, Austria.  Their experience showed as they dominated on the range and ski tracks, and the US Team has high hopes for these experienced athletes as they travel to Austria for the World Junior Championships. 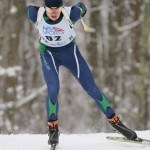 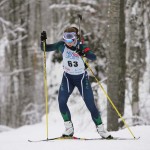 In the Junior Men’s category, Casey Smith of Methow Valley, WA was consistently the top junior man.  Making a huge jump from last year was Jake Dalberg of Ely, MN who was ranked second overall in the Jr category.   Following Sean Doherty in the Youth Men rankings was Jordan McElroy of Truckee, CA.  Both Jake and Jordan are members of the National Guard biathlon team.   Jakob Ellingson of Minnetonka, MN and Brian Halligan of Gansevoort, NY were ranked third and forth in the Youth Men.  Both Jakob and Brian are fairly new to biathlon and had some struggles in the shooting range, but managed to qualify with strong skiing performances. 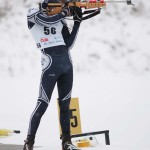 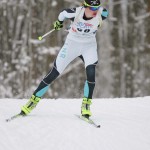 On the Junior Women had to battle it out with the Youth Women, and Anna Kubek’s fast times in the youth category made it difficult for Junior women to make the qualifying standards.  In the Jr Women’s category, Tara Geraghty-Moats, West Farle, VT was the sole qualifier.     Anna Kubek had a great series of races, shooting 100%, 90%, and 60% in her three races.  Anna is also a member of the Duluth East cross country ski team.   She had a particularly difficult training season this past year, only using one arm for training from April-November due to a shoulder injury.  It hasn’t seemed to slow her down.

The other qualifiers for the World Junior team were Aleksandra Zakrewska, Burlington, VT and Mikaela Paluszek, Farmington, NH.  Aleksandra was also a member of last years Youth Olympic Games team.  Finishing 4th in the Youth Women’s rankings was Siena Ellingson, Minnetonka, MN who did not qualify for the team, but finished the race series with 90% shooting race.  Siena and her brother, Jakob, both train with Loppet Nordic Racing and Hopkins High School ski team.

The World Junior Biathlon Championships will be held January 25, 2013 in Obertilliach, Austria and continues through February 1, 2013. IBU Youth/Junior World Championship start lists and results will be available here.  The team will travel to Obertilliach on January 16th.   Obertilliach is the home of the Dolomitenlauf World Loppet, and a spectacular place to ski and compete.